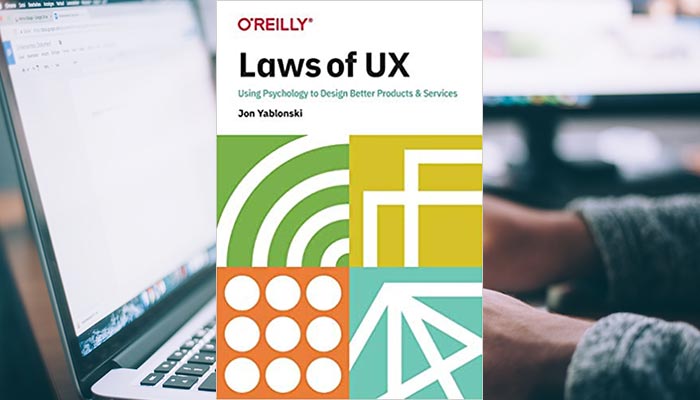 Web design is both art and science. The science part is mostly the application of psychology-related principles; thus, Laws of UX. The book describes 10 psychological/behavioral laws . . . ok, most of these laws aren't "laws", but rather, findings . . . ok, ok, some of these findings aren't actually "findings," since they're not ground in empirical data . . . ok, ok, ok, so, how about we call these good-ideas-that-seem-to-work that are based on data, theories, ideas, people we trust, or bathroom walls at MIT.

For example, Yablonski's first law is Jakob's Law: Users spend most of their time on other (web) sites, and they prefer your site to work the same way as al the other sites they already know. The idea is that if your site looks/works the same as other sites, your users will be able to transfer their knowledge from their experience with the other sites onto your site, and they will be able to use your site more quickly and more easily. The author doesn't discuss this law relative to any (peer-reviewed, data-based) studies, but rather, in reference to a recommendation by Jakob Nielsen, a highly respected usability expert. The author also relates this finding to the psychological concept of mental models, an individual's construction of a representation of how the world works.

Jakob's Law is really a heuristic, a general and practical approach, based on experience, that often works, but isn't guaranteed to work. The author could have grounded this approach in other psychological concepts as well, including learning, transfer, schemas and scripts, cognitive load, and prior knowledge, but in a 10-page chapter, there is limited. space for further grounding. This lack of grounding is both the book's strength and weakness. It's a strength in that a long theoretical or empirical discussion doesn't get in the way of the book's practical message. It's a weakness in that a deeper theoretical and empirical discussion would provide the reader with a greater understanding of why certain characteristics of web development are beneficial to users (and designers and clients) and this deeper understanding would be more likely to be applied and transferred to other development projects.


The book provides some useful approaches to developing websites, but lacks a depth that would benefit user's in the long run.
Relevant Links:
MAIN CATEGORIES
RECENT READING ENTRIES