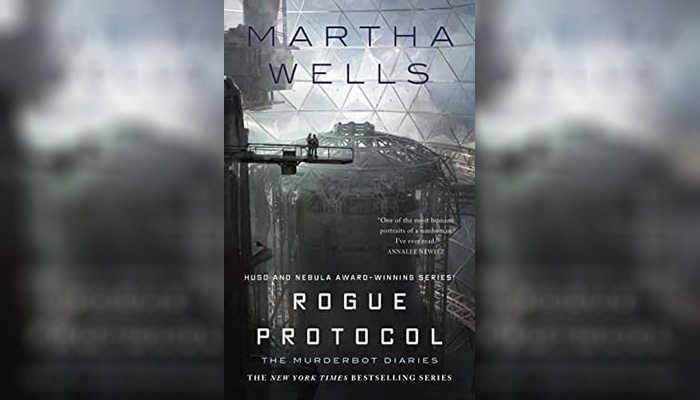 This is book 3 of Martha Wells' Murderbot sextet science fiction series. In the first book, All Systems Red, the security bot (SecUnit) with human bits, who calls itself "Murderbot," protects a group of scientists working on an unpopulated world from a group of GrayCris mercenaries and bots, a company that want's the spoils of the new world all to themselves. In the second book, Artificial Condition, Murderbot tries for find out more about its murky history (murky following a partial memory wipe, after the bot killed 57 people it was hired to protect) and discovers what it was led to believe wasn't the whole truth. After discovering the truth of its history (n book two), in book three, Rogue Protocol, Murderbot sets off to find out more about GrayCris, the company that tried to kill both itself and its scientist clients from Book one.

Murderbot's adventure takes it to Milu, a planet where terraforming was attempted, but failed. Murderbot joins a group whose task is to assess the planet for another group who might want to work on the planet. Upon reaching the abandoned terraforming facility, the assessment team is attacked and almost killed. Murderbot works with the assessment team to protect them and to figure out why someone wants them all dead. En route, Murderbot determines that GrayCris is somehow involved in the murder attempts.

Book 3 moved the narrative of Murderbot forward, providing an avenue for it to explore its more human side. The book also was a quick and lively read. The plots of the books seem well contained (a beginning, middle, and end) and not contrived. The author also connects book 3 to book 1, which provides a nice story arc.

These books are a nice break from reading peer-reviewed articles and textbooks. They're a quick read, but I've found myself up until 2 am to satisfy my interests as to what's going to happen next - always a good sign.